THE STORY OF THE LEGEND OF WILLIAM TELL

A Swiss legend about the apple of William Tell. The legendary Swiss crossbowman William Tell refused in 1307 to greet the hat that governor Gessler put on a stake in the village

square, as a symbol for the ruling Austria. Gessler then orders him to shoot an apple from the head of his son with his bow. He succeeds. However, when Tell is asked what the

purpose of his second arrow was, he replies that it was intended for the governor if he touched his son. He is captured on this. While Tell is taken to prison in a boat across

Lake Lucerne, a storm breaks out and he manages to escape. William Tell quickly returns to Küssnacht and shoots the governor with his crossbow. 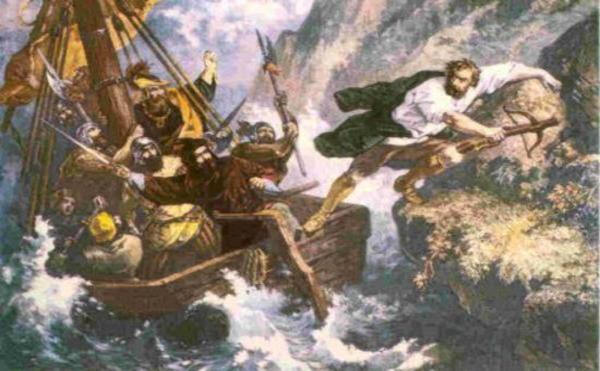 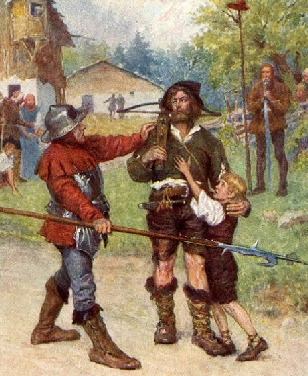 William Tell's home was among the mountains, and he was a famous hunter. No one in all the land could shoot with bow and arrow so well as he. Gessler knew this, and so he thought of a cruel plan

to make the hunter's own skill bring him to grief. Gessler (as Hermann Ricardo Neuhausen Gessler): "You, who can shoot like that," he said, "must do a master shot: you must shoot an apple from the head of your

child with an arrow." In vain, the upset father protested. Tell begged the tyrant not to have him make this test of his skill. What if the boy should move? What if the bowman's hand should tremble? What if the arrow

should not carry true? "Will you make me kill my boy?" he said. "Say no more," said Gessler. "You must hit the apple with your one arrow. If you fail, my soldiers shall kill the boy before your eyes." Gessler

would condemn both father and son to death. Then, without another word, Tell fitted the arrow to his bow. He took aim, and let it fly. The boy stood firm and still. He was not afraid, for he had all faith in his

father's skills. The arrow whistled through the air. It struck the apple fairly in the center, and carried it away. The people who saw it shouted with joy and Tell embraced his son. As Tell was turning away from

the place, an arrow which he had hidden under his coat dropped to the ground. "Fellow!" cried Gessler, " "You are a handsome shooter,"but tell me, why did you put a second arrow in your belt?" "Well," Tell

hesitated with his reply, but the governor said: "Say without fear the truth, I promise you that your life will be spared.  Tell replied "then I will tell the whole truth. If I had hit my child with the arrow, then the other

one would have been for you, and he certainly would not have missed his purpose!"" was Tell's answer, "this arrow was for your heart if I had hurt my child." Because of the second arrow Gessler said: I will let

you go into the chains and take you to a place where neither sun nor moon shines." 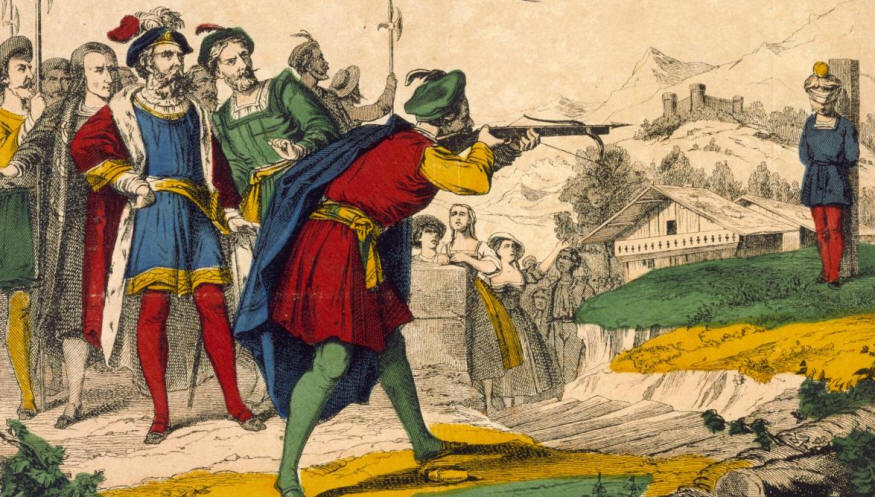 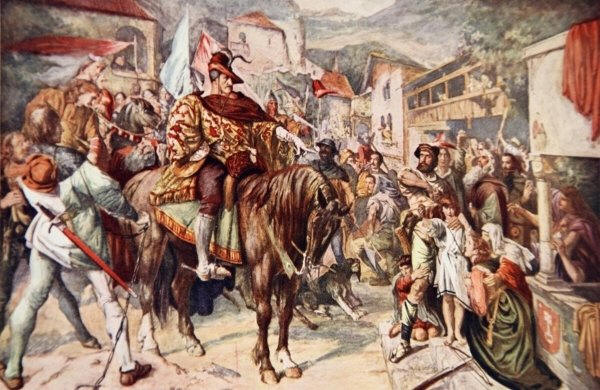 The traces of Wilhelm Tell in Switserland

The monument since 1895 (in Altdorf) Sculpted by Richard Kissling 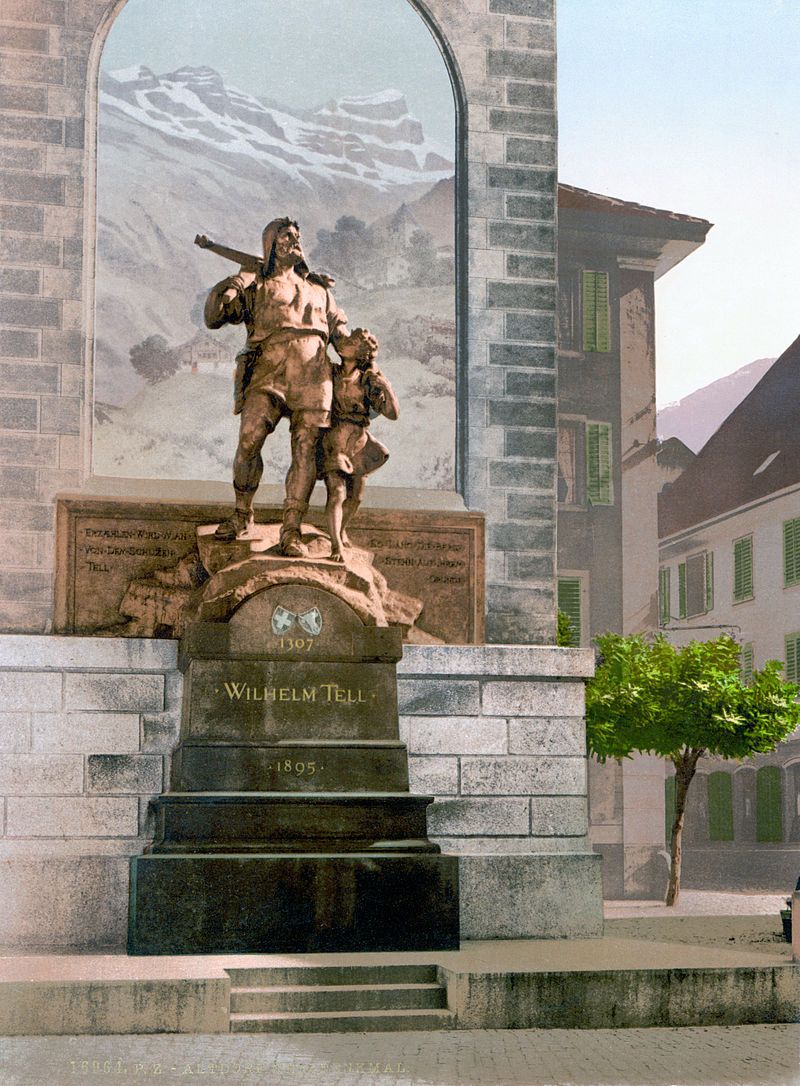 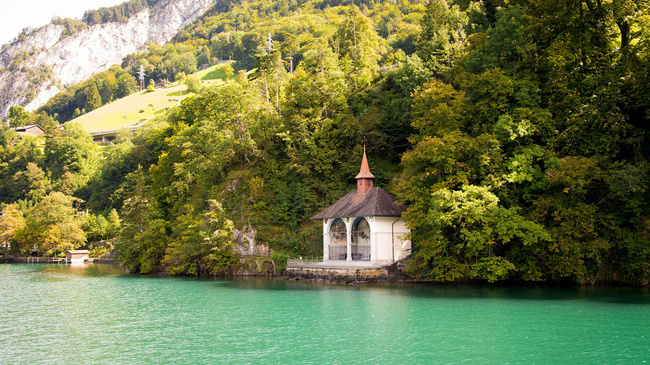 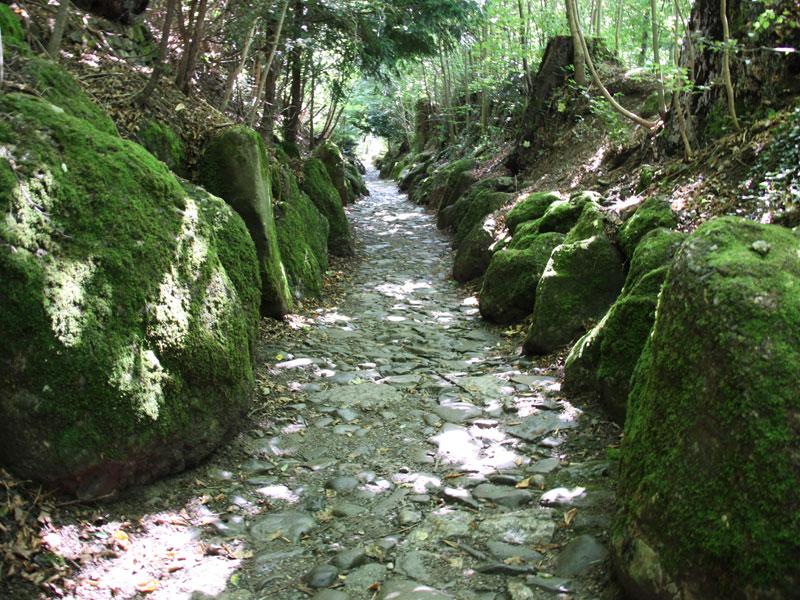 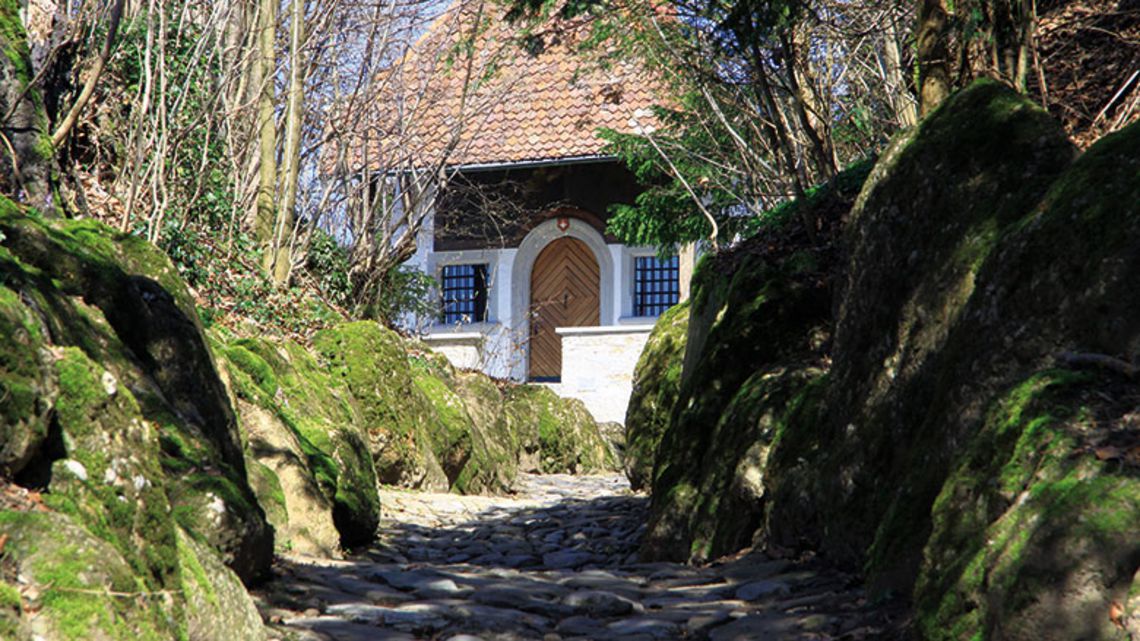 In the 'Holle Gasse.' Gessler's dead 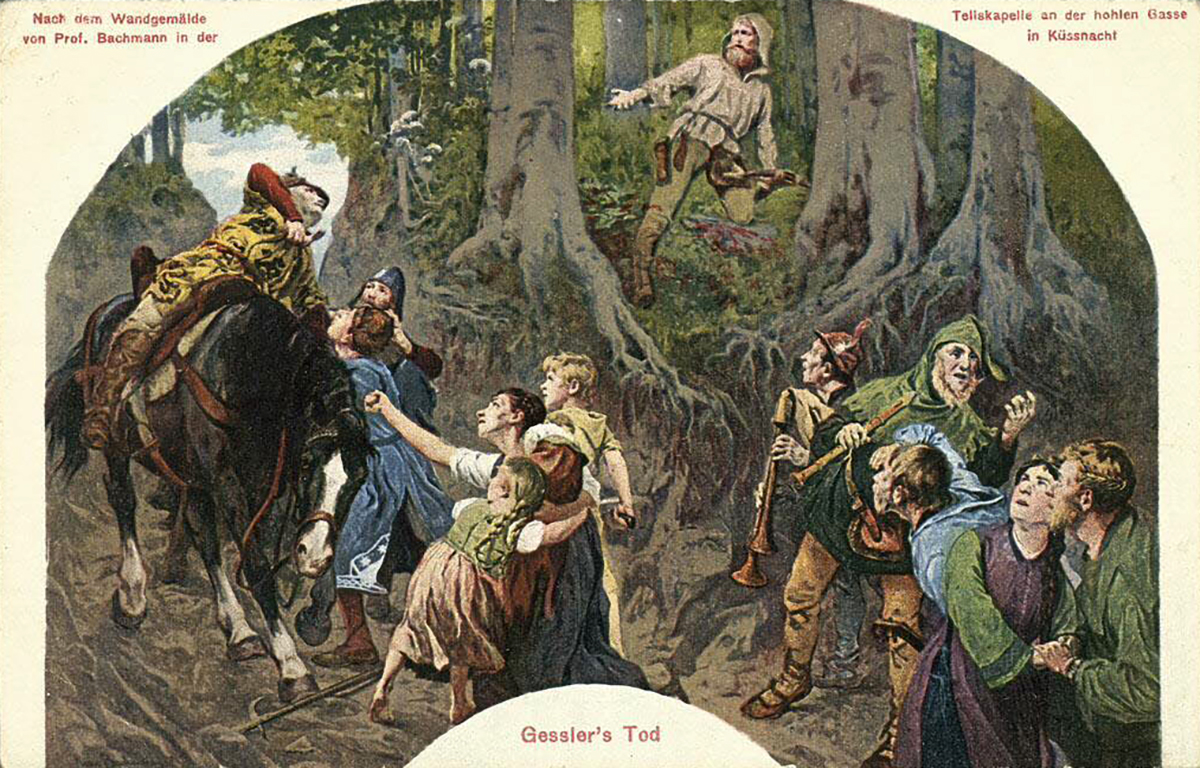 The legend of William Tell in pictures

Painting of Tell's story in the chapel. An old postcard with all the paintings on it. 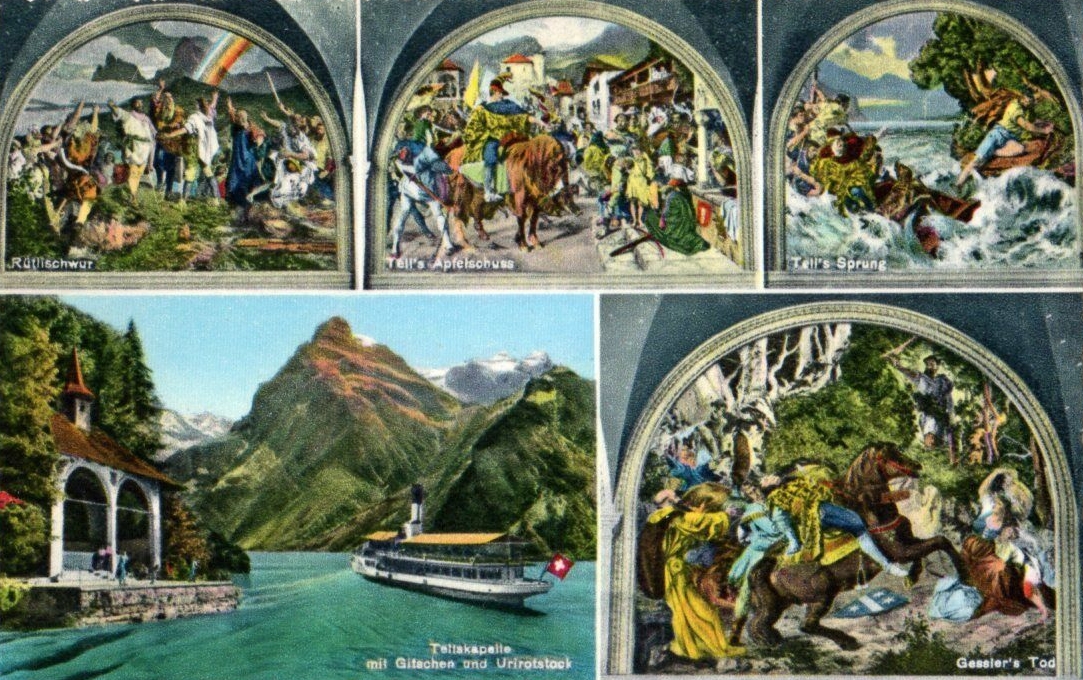 -First painting in tell's Chapelle The Rütlischwur is the legendary oath taken at the foundation of the Old Swiss Confederacy by the representatives of the three founding cantons, Uri, Schwyz and

Unterwalden, traditionally dated to 1291. It is named after the site of the oath taking, the Rütli, a meadow above Lake Uri near Seelisberg. Recorded in Swiss historiography from the 15th century, the

-The bailiff Gessler representing the count of Habsburg in central Switzerland requests that everybody greets his hat on a rod in Altdorf (Uri). William Tell refuses reverence to the hat.

The bailiff forces William Tell to shoot an apple off his sons head with his crossbow. William Tell hits the apple, but he has prepared a second arrow to shoot the bailiff in case he would have hurt the child.

The Jump of the boat

-William Tell is arrested and put in chains. The bailiff leaves with a boat on Lake Lucerne heading for his castle at Küssnacht. A storm due to warm fallwinds (not unusual in the region) brings the bailiff's team into distress. They let William Tell, who is more familiar with the lake, control the boat. William Tell directs the boat towards a small flat rock, takes his crossbow and jumps off while pushing the boat back into the waves.

The William Tell Opera by F. Schiller and G. Rossini

Too many to show here made a small collection of some. I You can find a lot via google. I will add a vew pictures. 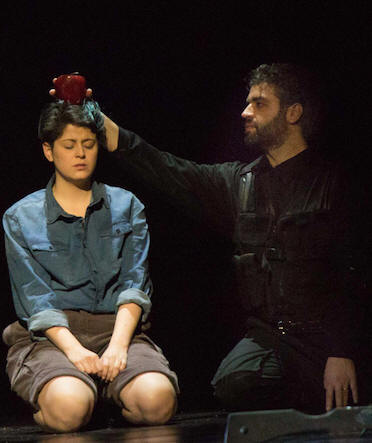 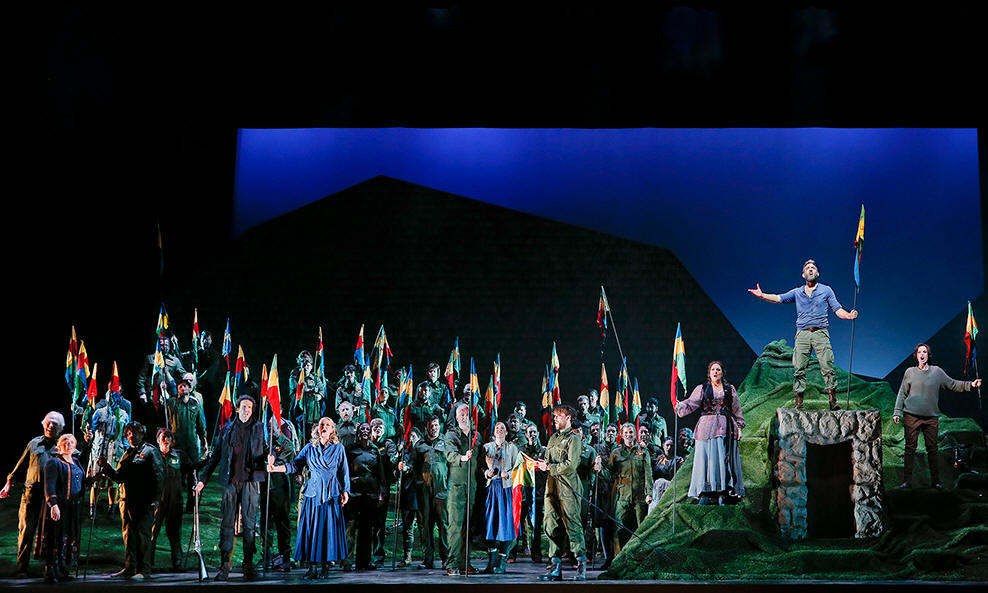 William Tell at the London opera House in 2015