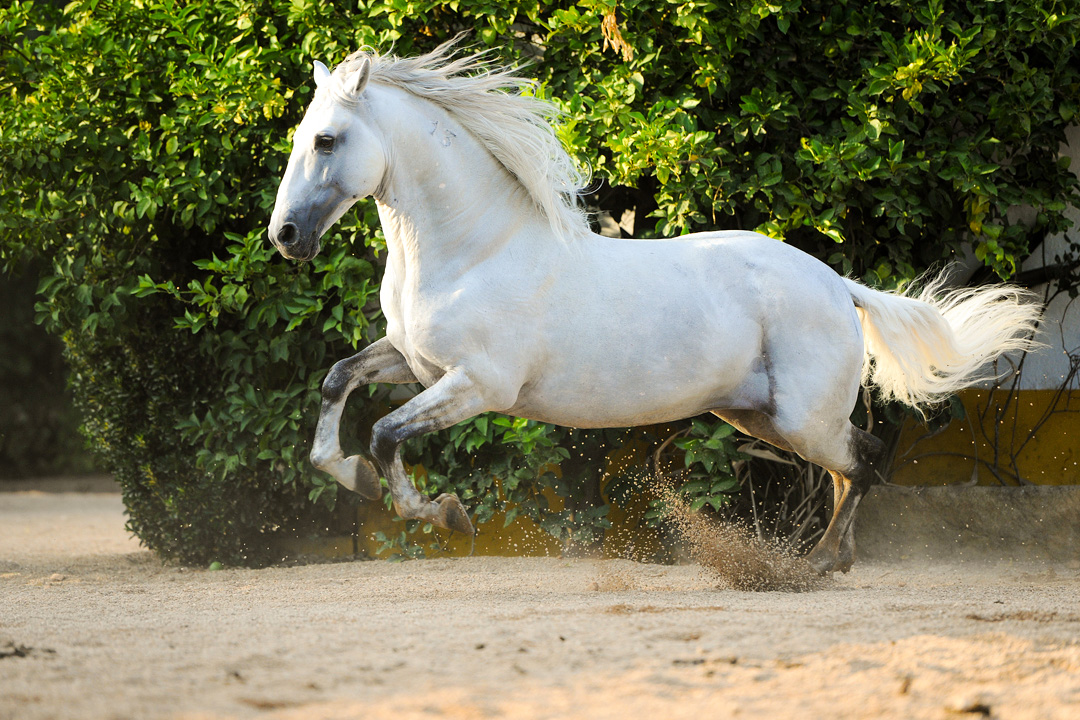 Colors all solid colors. Mold is the most common

A Lusitano stallion with traditional harness

The Lusitano is an Iberian horse, one of the three horse breeds of Portugal. The breed is closely related to the Andalusian. The name is

derived from Lusitania, which was a Roman province, located in the Iberian Peninsula.

The body of the horse is compact square. The head has a straight or slightly convex profile line (slight rus nose). The horse has an imposing curved neck and the mane and tail are often long

and wavy. This horse is called a baroque horse because of its appearance. The Lusitano can have any solid color, but fungus is most common. The lusitano is very agile and does not have

an exaggerated knee action. The horse is suitable for cattle drivers and Western riding because it has good cowsense. It is used during the Portuguese version

of bullfighting, in which the mounted torero plays a major role.

The Lusitano has been bred for several centuries in the south of Portugal and it is certain that the genesis of the breed corresponds to that of the neighboring horse breed, the Andalusian.

From 1912 to 1967 they formed a common studbook, which was then divided into a studbook for the Puro Sangue Lusitano and another for the Pura Raza Española (PRE).

The Lusitano looks genetically very much like the Andalusian, but also on the horse breed Alter Real, which was bred from 1747 especially for the Portuguese court. Nevertheless,

these different breeds are distinguished because the bloodlines have developed separately over a longer period of time.

The Lusitano is used as a harness horse and as a riding horse. These horses do well especially in classical dressage. In the past they were used for the cavalry. They were also known for their efforts

during bullfighting, which happened in Portugal from the horse, while from a certain moment in Spain only bullfights were allowed on the ground. The breed was specially bred for courage and agility.

The breed is also known from horse shows with elements of college dressage. Iberian horses enjoyed great fame over the centuries and contributed to the building of different breeds in Europe.

Today they still enjoy special popularity in England, the US and Australia. Also in the Netherlands an association of friends of this breed has been active since 1997. The official studbook is

The Lusitano is considered a rare breed of horse. It is estimated that Portugal has about twelve thousand Lusitano's. In the other countries where Lusitanos are kept and bred, there are a few

dozen to at most a few thousand, with France and Spain having the largest population outside of Portugal. There are four thousand broodmares worldwide. Partly because of its history as a

pure Iberian horse breed and given the small number of studbook lines, there are initiatives to put the Lusitano on the UNESCO list of world heritage sites. Baroque horse breeds in the same

breath as the Lusitano are the Spanish Iberian horse, the Pura Raza Española (PRE) and the Lipizzaner, originally from the Iberian peninsula, bred in the Austrian-Hungarian stud farm of

Lipizza, now Lipica in Slovenia. The Netherlands has more than four hundred registered Lusitan horses and a circle of passionate Lusitano breeders. The breeders and the dedicated

Lusitana owners are members of the Lusitano Vrienden Nederland association.

As enthusiasts, we are naturally enthusiastic about 'our' horse. That said, we mention striking characteristics here. The Lusitano is a sensible horse. This means that it is extremely alert to

every movement of the rider. "If you do Lusitano what you want, sit still!", Says a Portuguese horse trainer. The Lusitano is extremely human-oriented. As a Dutch Lusitano friend describes it:

"A Lusitano must first be won for you. Only then can you start thinking about riding. "In general, with all variations between individuals, Lusitano's are playful, enthusiastic, curious, inquisitive,

lively, attentive, stubborn, outspoken, eager to learn, talented, brave, characterful, elegant, tough, benevolent, helpful, affectionate. It is a horse that loves attention and the spotlight. A

Portuguese judge during the Lusitano Inspection: "Lusitano's are easy. Do exactly what the rider indicates. "You have to be able to ride.

The Lusitano is a versatile horse that performs well in dressage, in driving and in working equitation. A single Lusitano excels in jumping. The Dutch Lusitano stallion Trovador da Raposa (pictured)

belongs to the national top in dressage with Grand Prix victories in 2015, 2016 and 2017 and the title European champion heavy test at the Lusitano championships 2016. The Dutch Lusitano Digital

eighteen horses that appear in the Eftelinghow Raveleijn, half is Lusitano.