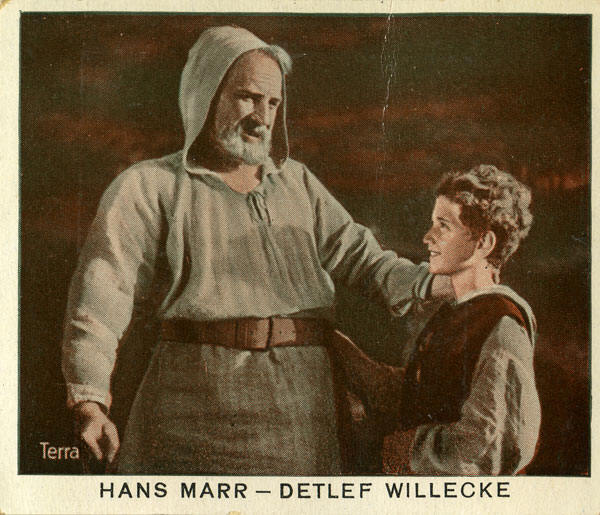 Flynn desperately sought financing to resume production, estimated at around £150,000, but failed. In 1956, he claimed he had $340,000 of his own money in the film and still hoped to finish it in autumn of that year.This did not happen. The film's collapse ruined Flynn financially. He estimated it cost him $400,000 in all.

Impact of the film

A little more than a minute of footage was shown on Turner Classic Movies in the early 1990s as part of a feature on Flynn, but that short clip itself is now lost as well. Flynn's estate have chosen to remain silent about it.The model ski resort was turned into a real ski resort that uses the film's production to lure tourists in every year, and is still active today.

A little bit over a minute of footage was shown on Turner Classic Movies in the early 90s as part of a feature on Flynn, but the feature itself is now lost as well. None of the 30 minutes of footage has surfaced and nobody knows where any copies can be found, as Flynn's estates have chosen to remain silent about it. The footage is now considered entirely lost, with only a single still from the film remaining, as well as a single photograph taken during production. The model ski resort was turned into a real ski resort that uses the film's production to lure tourists in every year, and is still active today. 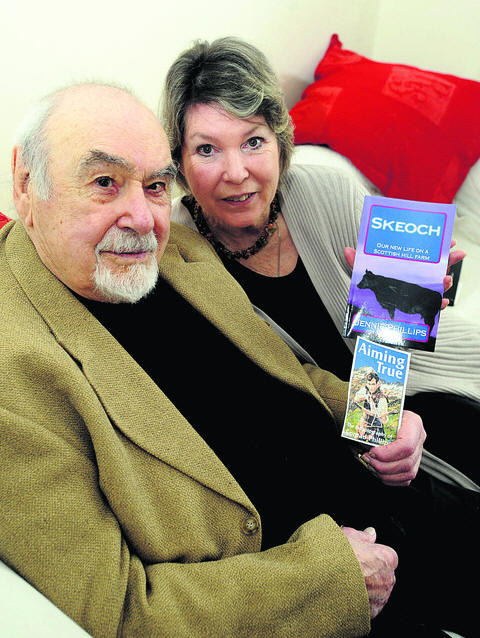 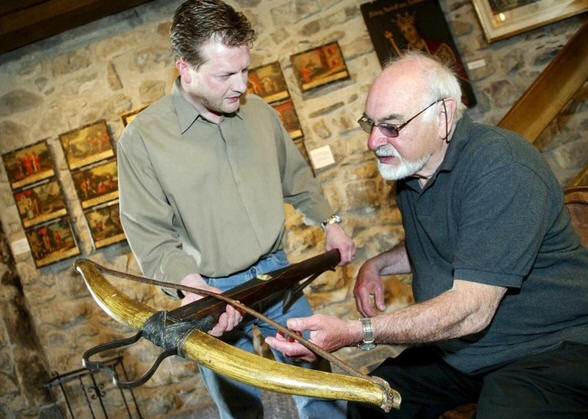 (But there is a lot of small old (post)cards, spoons, buiscuit cans for sale. It's impossible to show them all.) 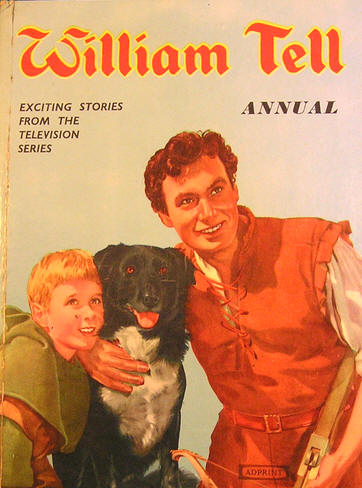 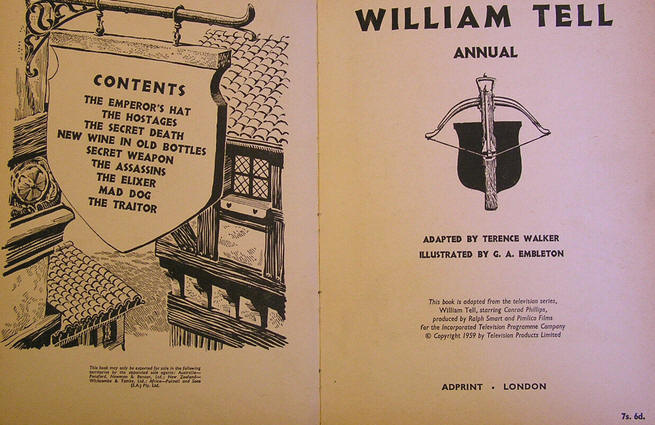 This book has beautiful old illustrations 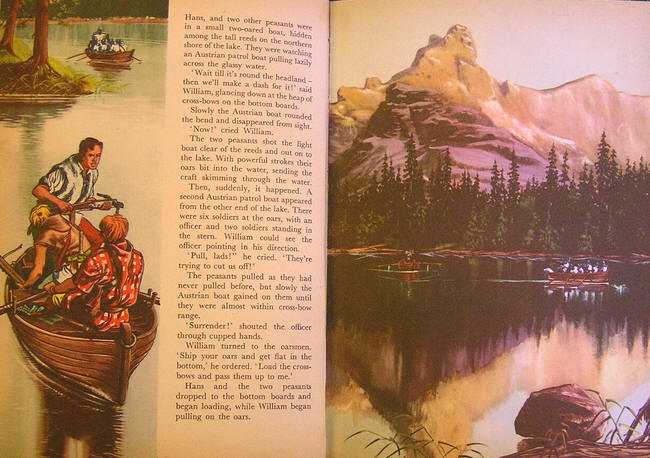 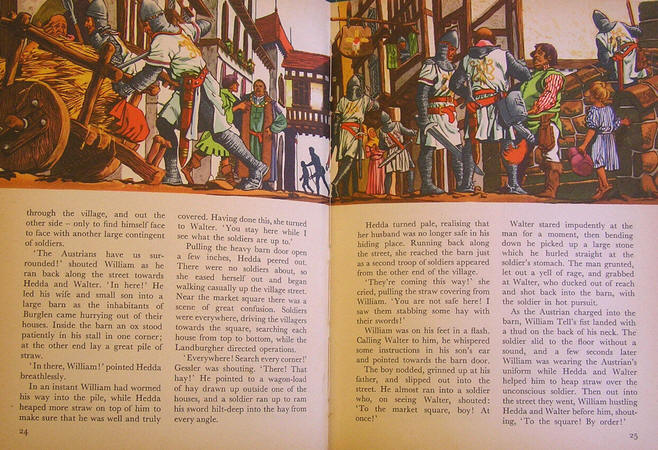 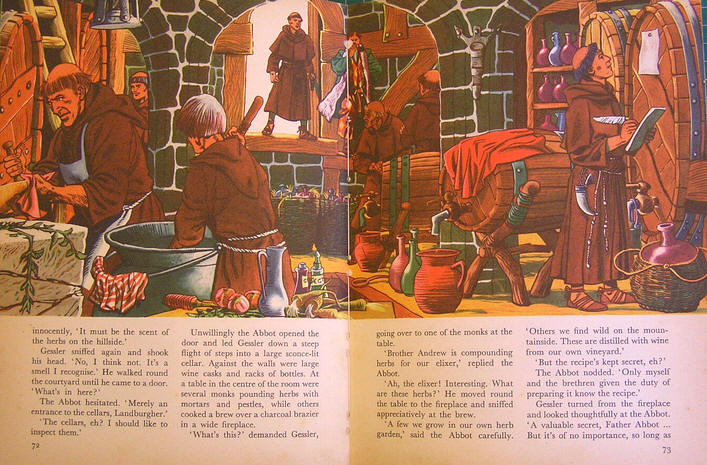 And here are the series on dvd starring Conrad Phillips

Conrad Phillips stars in the classic 1950s action adventure series - William Tell. Set in the fourteenth century during the hostile Austrian occupation of Switzerland, William Tell is a reluctant freedom fighter, battling heroically against the tyranny and oppression of the invading forces. William Tell is the Swiss version of Robin Hood, and presented here is the entire series of 39 action-packed episodes of this classic action show.

I purchased The William Tell series on DVD as I remember it from childhood memories and I'm very fond of vintage npstalgia, hoever like most things when you are a child, it all seemed much more fantastic then! On reviewing it and remembering some pieces of the series and, specially the glutunous baron who opposed William Tell, the notorious landberger Gessler, it raised a smile or two. The storyline is basic and as usual the enemy soldiers are seen as a bit stupid and blundering and the hero Tell always wins. The landscape that is meant to be Switserland is filmed in the mountainous region of Wales, but these type of series were indeed done on a budget, not having the tech, that is available now. I would buy it again! Fond memories, great music theme. Do watch it and enjoy!

"I was thrilled to see this series come up on E-Bay. Considering this series is around 50 years old, the reproduction onto DVD is quite amazing. Obviously, in black and white, but comes over on screen as very, very good. It's good to see the fighting etc. now so obviously fake, compared with today's computer generated films etc. The sound track is just as fantastic as it was all that time ago, sung by David Whitfield, then I would say that wouldn't I as it is one of my all time favourites. All in all, this is a must have for anybodys collection of golden oldies, presented in a lovely case with Conrad Phillips on the front as the very dashing William Tell. Bronnti."

"I really liked the william tell box set as it brings back very happy child hood memories when the series was first broadcast on bbc when i was about 12 or 14 so you could say i loved it in a sentimental way ,and the quality was more than excellent ,just as if i was watching original ,and being true black and white with no color tinge at all made it all the more a good buy .i had tried to get this in past but could only get it in region 1 so you can imagine my delight when it came out in e-bay in region 2 europe format . Im sure that i like many others of a certain age would like to see more of the late fifties through to the end of the sixties tv series including the lone ranger etc. Do hope this is of interest to e-bay and anyone else . Yours R. John Darrell Gregg 64 but young at heart."

The third movie and series is Crossbow!

A real plus to combine actor Conrad Phillips (the Tell of the second movie) as William Tell's mentor in Crossbow. 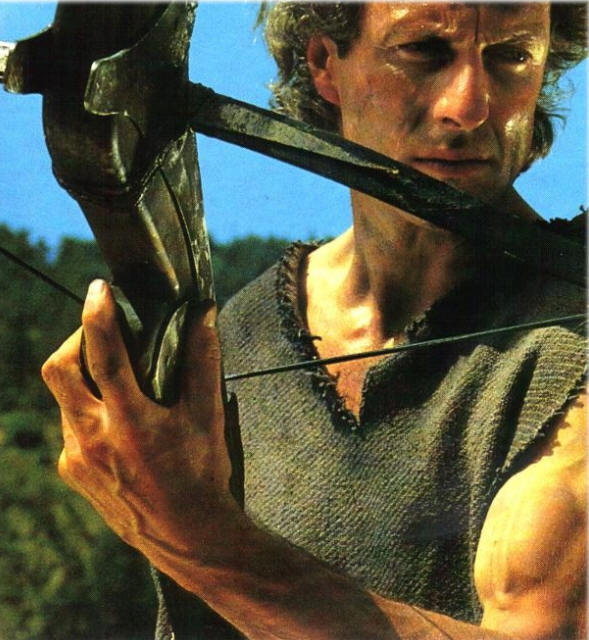 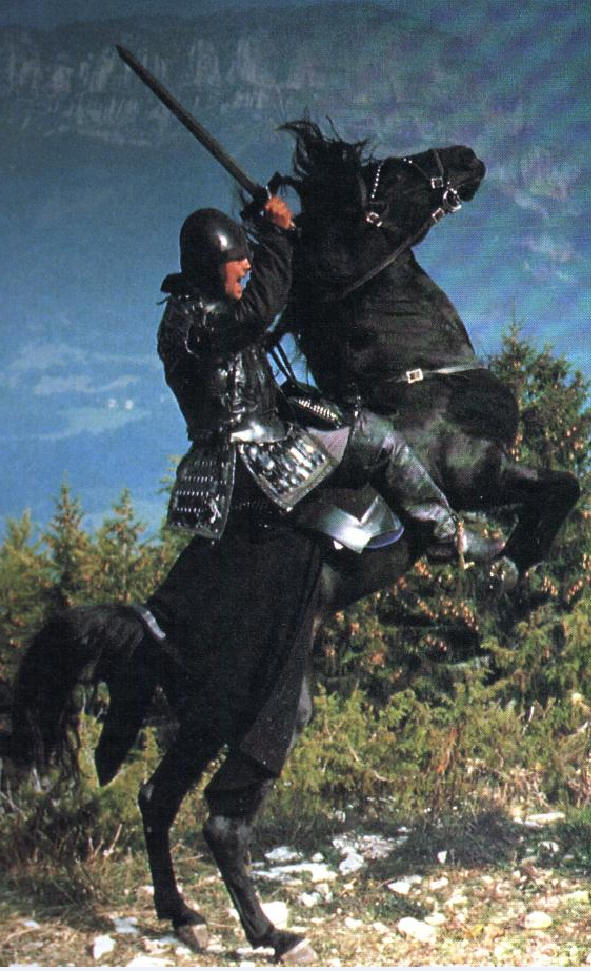 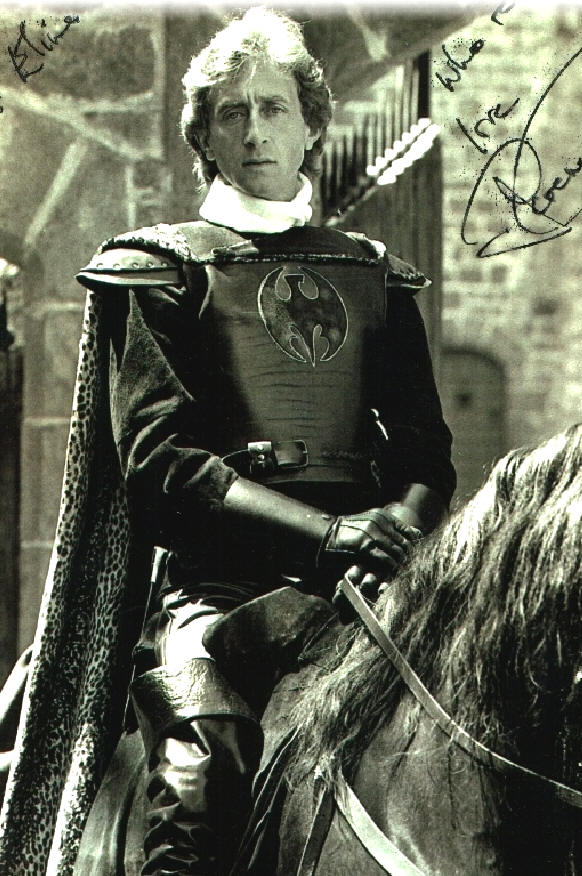 It took a long time before Crossbow came on dvd. First the movie came out (left below), Then the series in French language only and later finally the 72 series on dvd in English! (the pictures below: middle and right)

It stroke me the left dvd (the movie) is totally photoshopped. Princess Irena doesn't look like her anymore, she never wore that dress, the castle in the back looks like a castle of the Cathars, more in the Pyrenees mountains south. There are a few soldiers in Crossbow but never on a brown horse. Tell never wore such an outfit and the Crossbow seems a replica drawning. They would probably make it look more attractive, but here elements doesn't suit on the series. The other dvd are all with the original looks.

The publisher of the series on dvd is Milcreek.

For sale at Amazon: https://www.amazon.com/Crossbow-Complete-Digital-Will-Lyman/dp/B07895ZVCN 11.99

Via the episodeguide, there is made a link to Youtube. Until 2018 there was no possibility for people to watch Crossbow back. I received many reactions from people who asked me when the series came on DVD in English. This finally happened around 2018!

The quality of the Youtube links is bad. It just for the impression. Long ago people have put them from VHS on Youtube, because there was no dvd release. Now they are brought out on dvd you better buy the series. There are no copies made on because of the copyright. The new dvd is of good quality and not expensive for 72 episodes.

Below (left and middle) Atari game of Crossbow and at the right: dvd 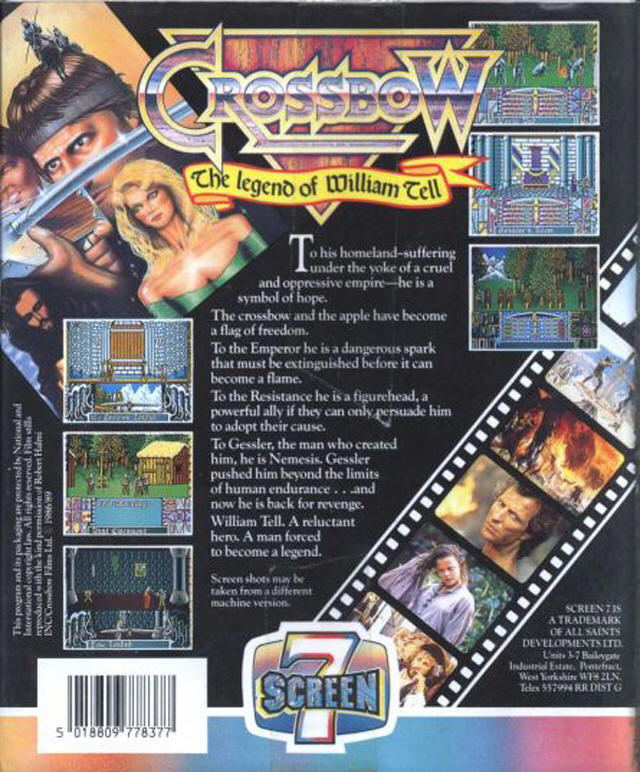 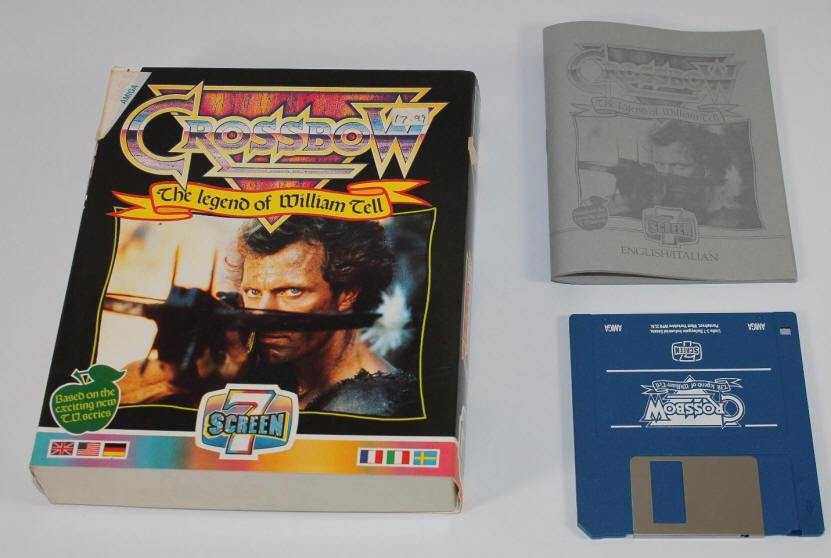 In the middle the soundtrack LP. They have the same tracks on it. You can see one row below 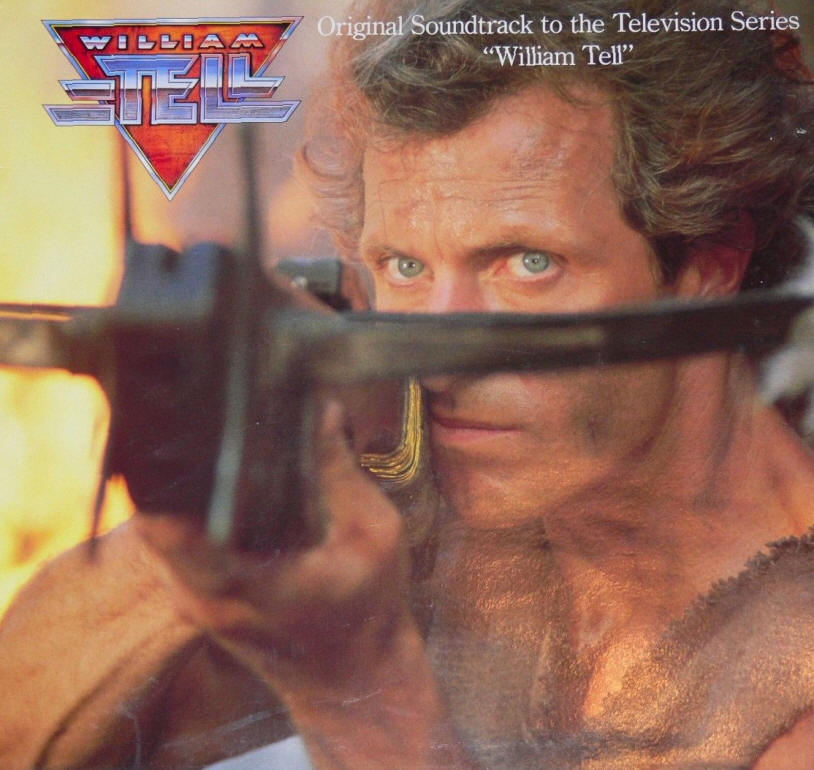 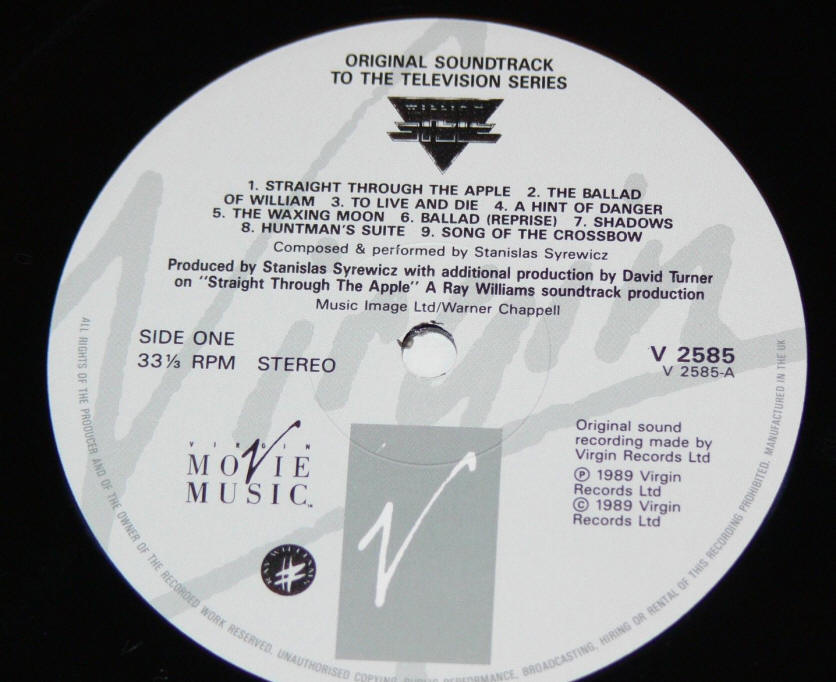 A number of comic books have been published 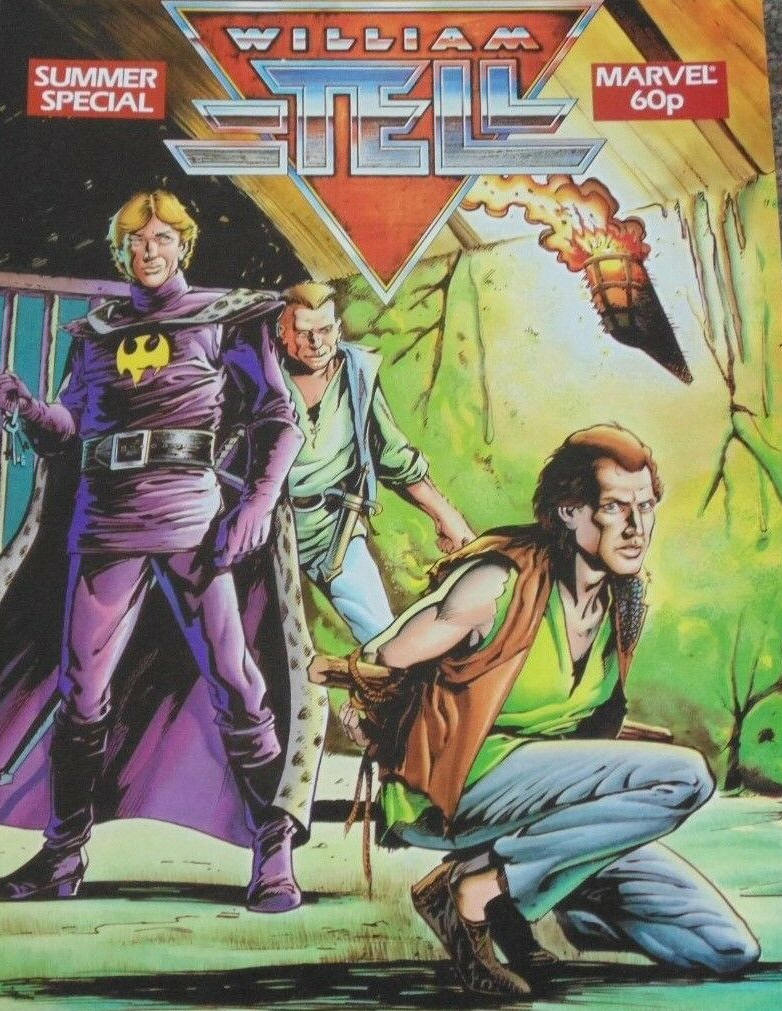 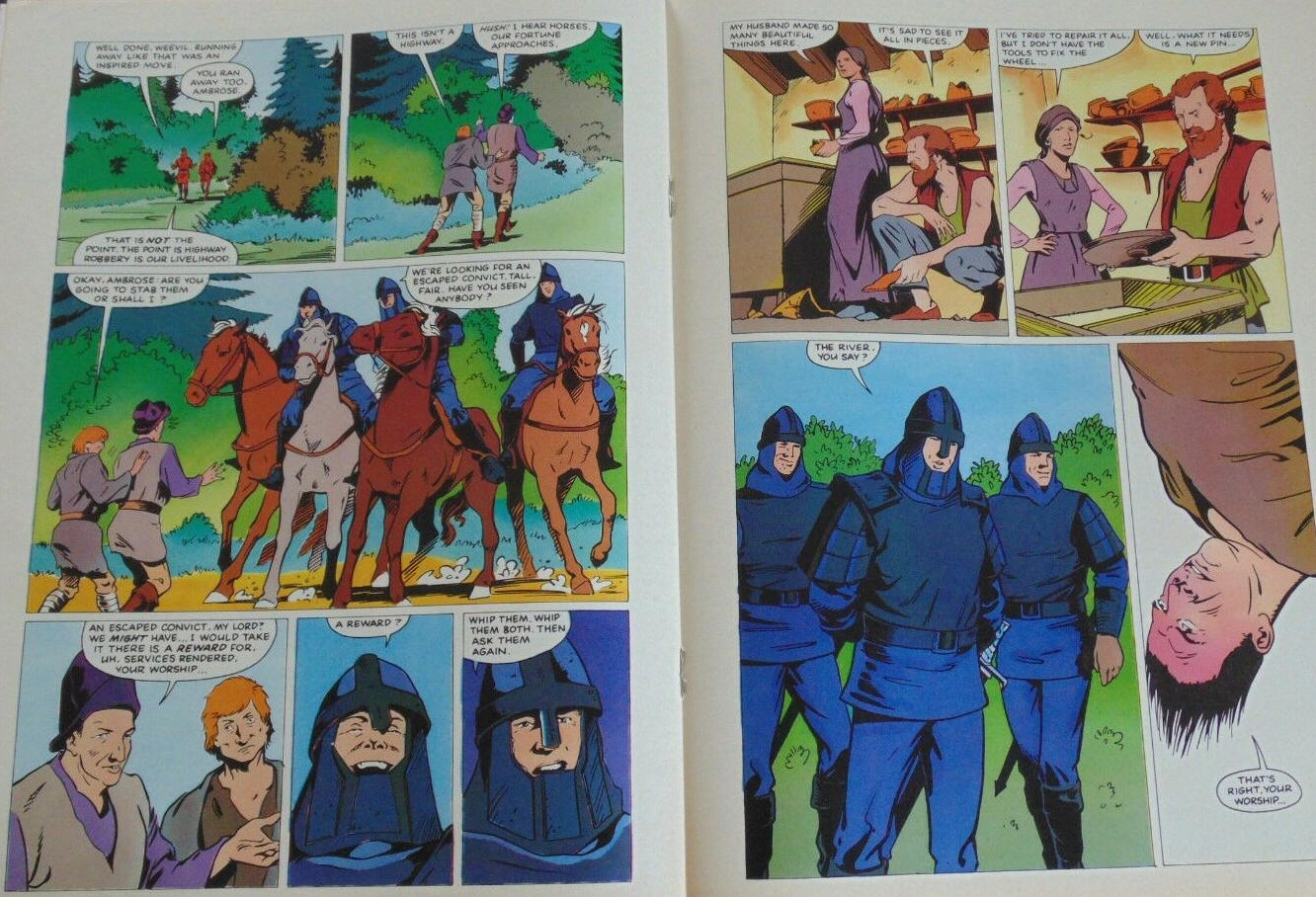 The right book is another book 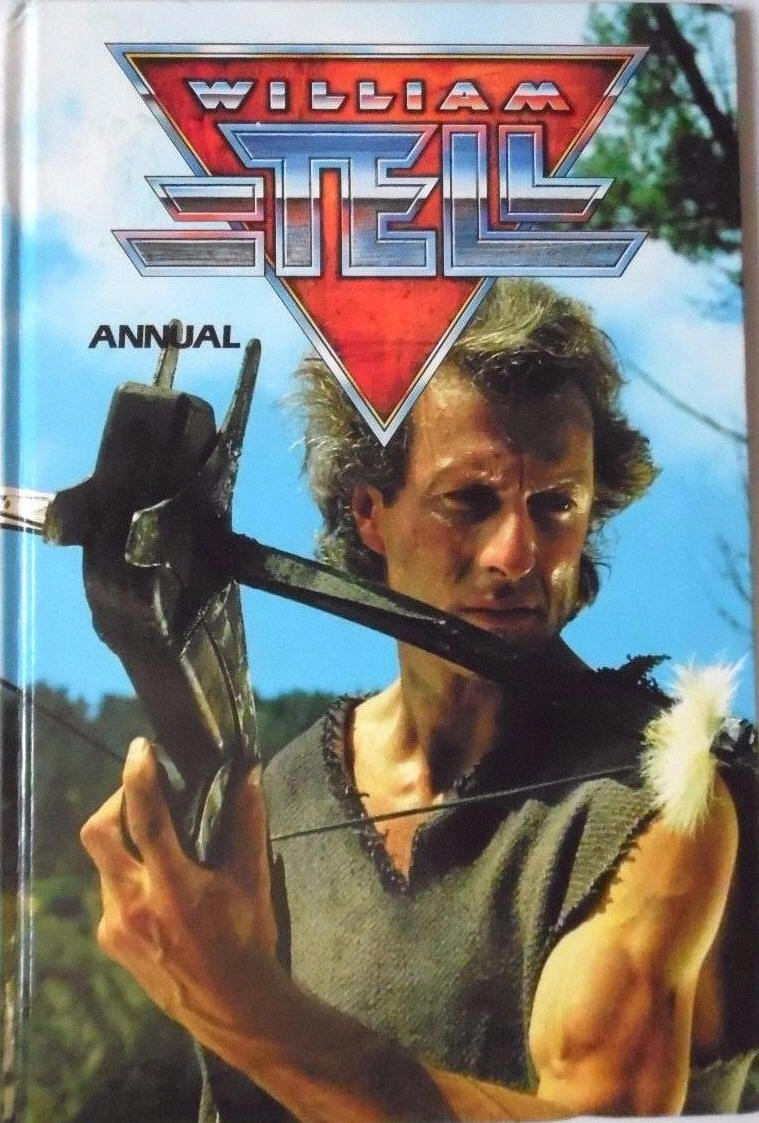 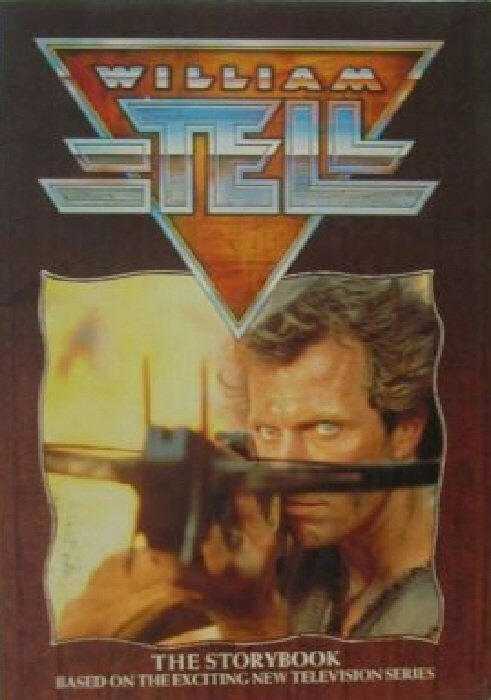 Middle: a small book, There's made 4 books of them (The Moor, The Legend, The Little Soldier and The Stallion) 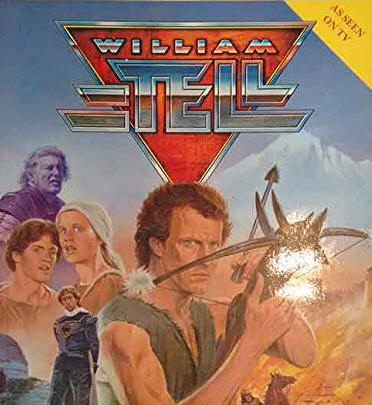 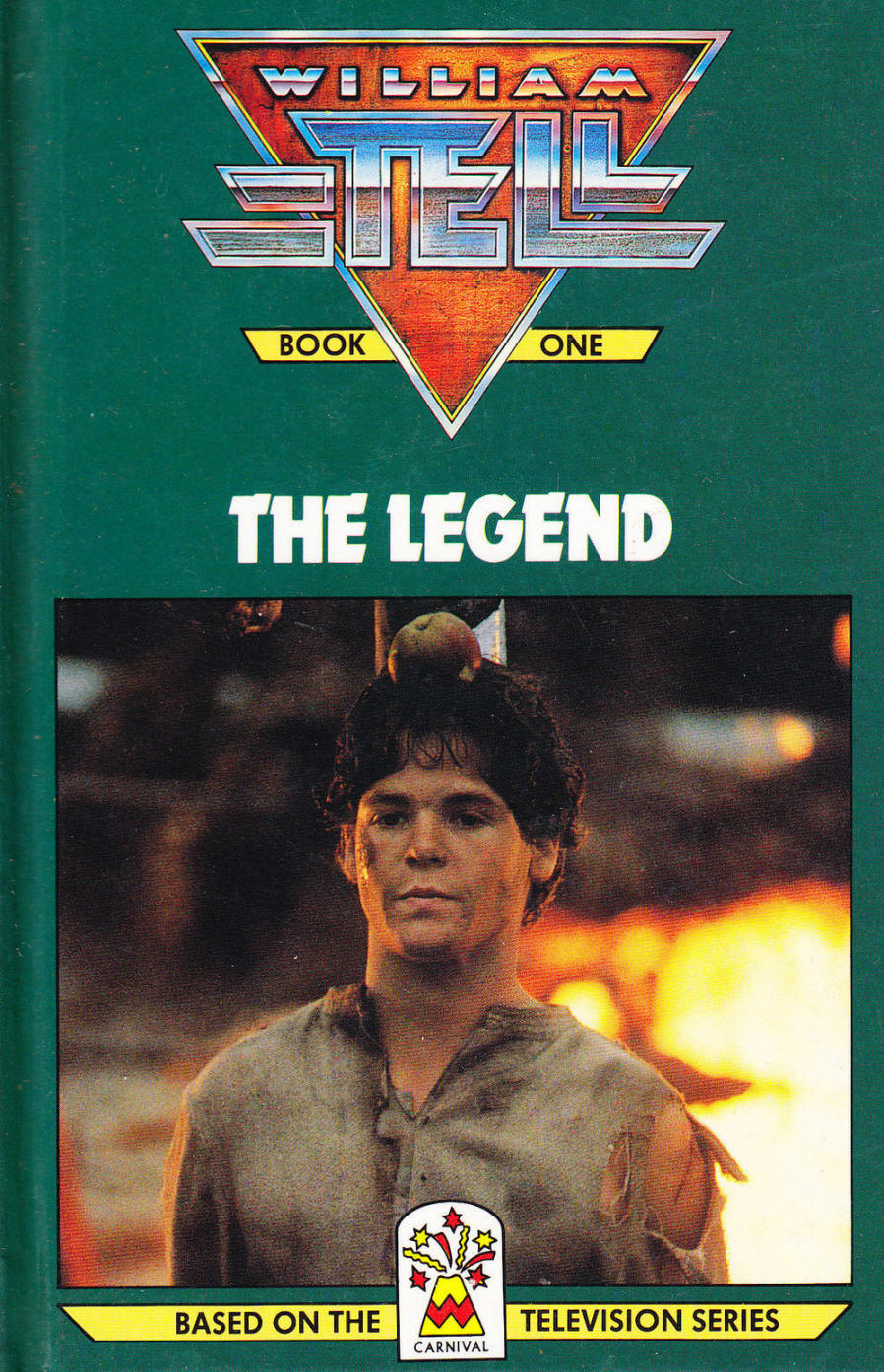 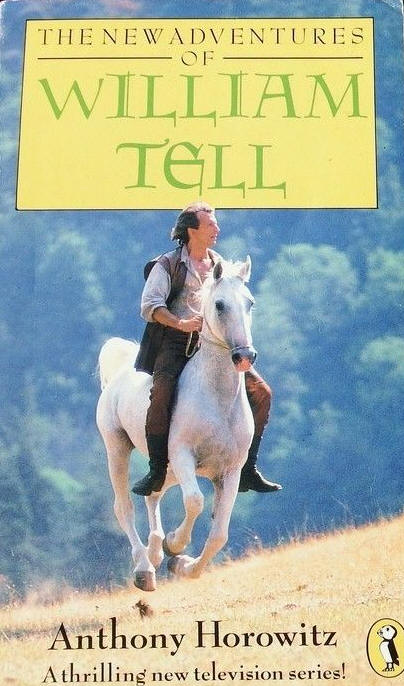 Would you like to buy an item? There is a change you can get what you like on tradingsites. They are no longer for sale.

Though I have collected all books. Those pictures are taken of google and a tradingssite, my scanner doesn't work well. That's why I can't show you all four small books (middle picture above). 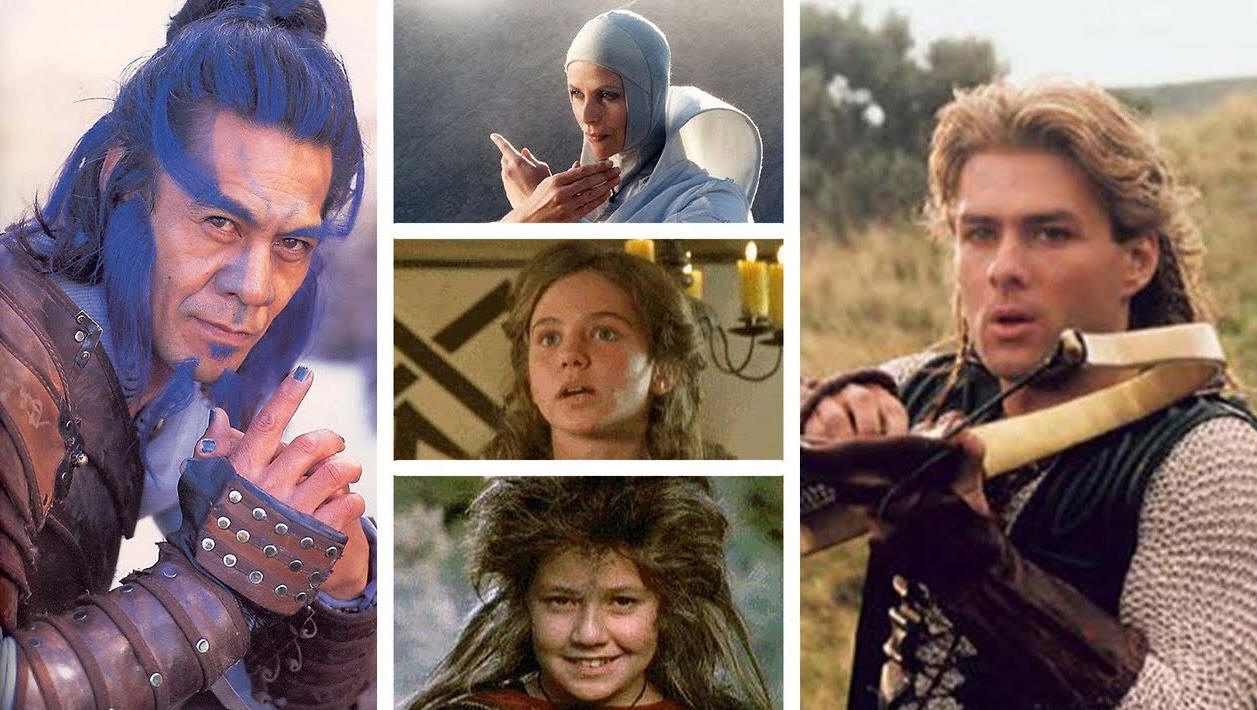 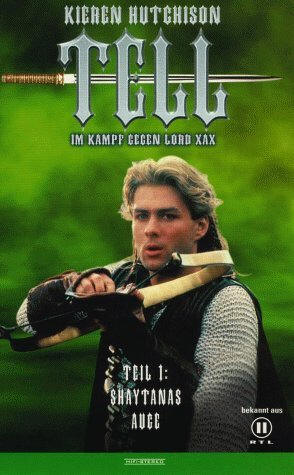